One of the greatest challenges facing an increasingly urbanized Greater Toronto Area (GTA) is the transformation of our traditional bedroom communities into functional cities. A key component of this transformational process is transit infrastructure. Please join us for an evening with some of Toronto's leading experts as they speak on the ways transit is shaping development in the GTA.
Register Yourself Register Two or More
View Event Attendees 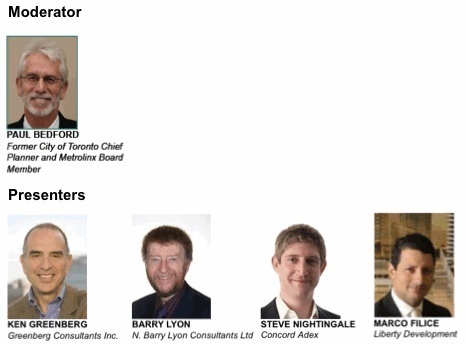 One of the greatest challenges facing an increasingly urbanized Greater Toronto Area (GTA) is the transformation of our traditional bedroom communities into functional cities. A key component of this transformational process is transit infrastructure. Please join us for an evening with some of Toronto's leading experts as they speak on the ways transit is shaping development in the GTA.

Paul Bedford, former City of Toronto Chief Planner and Metrolinx Board Member, will provide an introduction and an overview of Metrolinx and its regional transit strategies. Next, our discussion will focus on the development plans of three GTA projects and the challenges and opportunities that are common to city building initiatives.

These three projects will be relevant to 416 and 905 attendees.

1.  Mississauga Downtown 2021 - Tying the suburban network together through Rapid Bus Transit in Mississauga

3. World on Yonge - Planning for the future, creating a development on the extension of the planned Yonge Street subway line in Markham 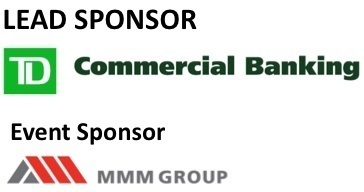 Ken Greenberg is an urban designer, teacher, writer, former Director of Urban Design and Architecture for the City of Toronto and Principal of Greenberg Consultants. For over four decades he has played a pivotal role on public and private assignments in urban settings throughout North America and Europe, focusing on the rejuvenation of downtowns, waterfronts, neighborhoods and on campus master planning, regional growth management, and new community planning. Cities as diverse as Toronto, Hartford, Amsterdam, New York, Boston, Montréal, Ottawa, Edmonton, Calgary, St. Louis, Washington DC, Paris, Detroit, Saint Paul and San Juan Puerto Rico have benefited from his advocacy and passion for restoring the vitality, relevance and sustainability of the public realm in urban life. In each city, with each project, his strategic, consensus-building approach has led to coordinated planning and a renewed focus on urban design. He is the recipient of the 2010 American Institute of Architects Thomas Jefferson Award for Public Design Excellence and the 2014 Sustainable Buildings Canada Lifetime Achievement Award. Involved in many grass roots and community initiatives he has served as a Board Member of Park People, a non-profit dedicated to the improvement of Toronto's parks, is currently on the Advisory Board of Waterfront for All and President of the Wellington Place Neighbourhood Association. He is a co-founder and Vice Chair of the new City Building Institute at Ryerson University in Toronto. A frequent writer for periodicals, he is the author of Walking Home: the Life and Lessons of a City Builder published by Random House. He played a leading role as urban design lead and client representative for The Bentway, the transformation of a major public space under the Gardiner Expressway in Toronto and is currently serving as an advisor to Sidewalk Labs for Quayside on the Toronto waterfront.
View in Member Directory Will open in a new window