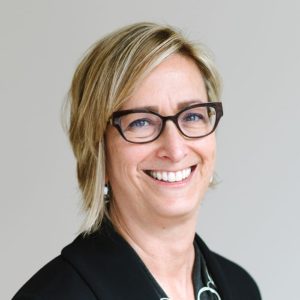 Cyndi Rottenberg-Walker is a Partner with the urban planning and design consultancy Urban Strategies Inc. and is currently Vice-Chair of the ULI Toronto Management Committee and Chair of ULI Toronto’s Mission Advancement. Over the span of her 30-year career, Cyndi has received numerous awards for planning and design excellence for her work across Canada and the United States, including being inducted into the Canadian Institute of Planners’ College of Fellows in 2017, the highest award the Institute can give to a planner.

Since joining Urban Strategies in 1989, Cyndi has worked on a wide range of projects, including campus master plans for Cornell University in Ithaca, New York, and Princeton University in Princeton, New Jersey.

“Both plans were universally endorsed,” she says. “We were able to build consensus amongst a wide range of perspectives and opinions.” Another notable project Cyndi has recently worked on is the Alexandra Park Neighbourhood Revitalization program with the Toronto Community Housing Corporation (TCHC), helping to secure over 800 social housing units within a new income-integrated community centered around significant new parks, and a new Community Centre, child care and social enterprise spaces.

“We’ve had such a tangible set of conversations to answer questions like ‘what makes a community?’ and ‘what do the people who have lived in the community for a long time need to be able to continue and advance the quality of their lives?.’ The project has been very committed to public engagement with all voices and cultures, which to-date hasn’t been very typical,” she says.

Cyndi’s planning career began in an Environmental Psychology course during her time as an undergraduate student at the University of Toronto. They read The Death and Life of Great American Cities by Jane Jacobs, which she describes as a moment when a big light bulb went off for her. For Cyndi, it was the first time she’d seen a connection between two different areas of interest she had: psychology and urban studies. From there she went on to a Masters degree in urban planning.

What has kept her so passionate and engaged in the urban planning profession is the inherent multi-disciplinary and problem-solving nature of planning.

“Whatever the challenges of the day are — socially, politically, economically, environmentally, and, as we’re seeing now, from a public health perspective — urban planning provides an amazing starting point to begin to understand the strategies and solutions that can have a meaningful impact,” she says. “As planners, the nature of work we do is constantly changing because the world we are working within is constantly changing. It’s powerful to be able to say that we [as planners] continue to grow and be challenged throughout the duration of our careers.”

Cyndi describes her career path as a privileged one that has been supported by incredible female and male mentors from within Urban Strategies and beyond.

ULI Toronto’s Women’s Leadership Initiative (“WLI”) emphasizes the importance of mentorship and sponsorship and a fulfilling aspect of her job is being able to mentor people both within and outside of her organization. Urban Strategies has a formal mentorship program that sees every member of the team paired with both a peer and partner mentor. The mentors and mentees have regular check-ins over coffee or lunch. Of course, throughout the pandemic the check-ins have been done remotely and are viewed as even more important in maintaining connections. The mentors and mentees not only talk about professional growth, but about their everyday lives and what challenges and opportunities their lived experiences they bring to their work.

“It’s about relationship building and the opportunity to give people a bit of insight to the things that seem hard in the beginning of your career and how that changes as we continually grow and challenge ourselves as professionals,” Cyndi says.

Speaking about the success of WLI, Cyndi recalls the powerful feeling she’s experienced during the organization’s events.

“It’s very impactful to sit inside of a WLI event. To sit in a room with hundreds of committed and powerful women, young and old. WLI isn’t a separate entity to ULI; it’s embedded within the organization,” she says. “And one of ULI’s major priorities now is pivoting from the success of the WLI initiative to turn it to a much broader equity and diversity initiative. We’re taking a look at the organizational strength of WLI as a platform to capture, not just gender diversity, but also racial and other forms of diversity.”

Similar to most career-driven women who started their careers in the 1980s and 1990s, Cyndi describes the too-familiar experience of being the only woman in the room and it being harder in the early days to have your voice and input heard as loudly as a male voice. With her children now grown Cyndi says “it is, and always has been, challenging to balance responsibilities and commitments and I would have hoped that it would have changed quite significantly from when I was raising children. But with the impact of COVID-19, the requirement for both professionals and non-professionals to work from home and juggle healthcare and childcare has highlighted that the impact on these areas has been far greater on women than on men.”

Drawing a parallel to urban planning’s multidisciplinary nature, Cyndi says the most distinguishing characteristic of ULI Toronto is “that ULI, by its intention, is an organization that fosters conversation amongst professional disciplines like real estate developers, planners, architects, landscape architecture, people in the financial sector, and social enterprises.”

Cyndi continues to be active in her own field as a professional planner with the Ontario Professional Planners Institute (OPPI) and the Canadian Institute of Planners (CIP), but says that ULI’s strength is fostering conversations and relationships amongst people across siloed professions, as each one typically has an independent professional organization. Her involvement with ULI began as a company-wide commitment by the partners at Urban Strategies to become a corporate sponsor. Seeing the benefits to both the business and to her dedication to continuous learning and building interdisciplinary connections, Cyndi’s involvement moved from a member and corporate sponsor to serving as Co-Chair of ULI Toronto’s Symposiums in both 2015 and 2018. She went on to become Co-Chair for the tour days of the 2020 ULI Spring Meeting and continues to serve as a member of the University Development and Innovation Product Council. Most recently, she was appointed Vice-Chair of the ULI Toronto Management Committee and Chair of ULI Toronto’s Mission Advancement.

Although her dedication to her business and profession occupies a lot of her time, Cyndi enjoys exploring and adventuring around Toronto’s many urban and natural features, walking, cycling, hiking and paddling it’s rich tapestry of ravines, shorelines, neighbourhoods and Lake Ontario.

Apply to Join a Committee!

Apply to Join a Committee!