When asked what her motivating factor continues to be as part of her 16-year career in the land use and development industry, Renée Gomes’ response is: “Toronto and its 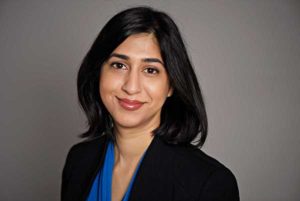 people.” Contributing to a region that people want to live and work in is what Renée strives for. Why? “Because Toronto is my home,” she replies without hesitation.

Renée is currently the Chief Development Officer and Vice President, Development at First Gulf. Before taking this role, Renée worked at Waterfront Toronto leading various waterfront revitalization projects, and at Urban Strategies, where she consulted on a number of urban planning projects in Toronto and abroad. It’s no surprise that, at the heart of her work, are some of the city’s most significant large-scale projects: East Harbour, Ripley’s Aquarium and West Don Lands.

“Working on long-term, large-scale master planning initiatives provides the opportunity not only to work through land use and planning complexities but also to leverage them to create extraordinary outcomes,” says Renée, explaining her love for her work in the city.

“Toronto has been built up and has evolved quite significantly over the last number of years; it has been in constant growth since I started working,” she says.

“As a result, much of the development we are all working on now involves infill sites, which are being reimagined for purposes that currently tend to be underserved by existing infrastructure, both private and public. There is an art and a beauty in bringing together private and public players to work together to realize shared priorities for our city. You can only get great work through the minds, efforts and participation of many.”

Renée points to projects around the waterfront as great examples of what can be delivered through collaboration centred on shared interests. With billions of dollars of government investment committed to public infrastructure such as new transit, flood protecting the lands around the Don River and improving municipal servicing, it ultimately attracted private investment.

All of the waterfront development over the last 20 years east of Yonge Street has been facilitated by public investment in infrastructure and public realm improvements, which also benefits existing communities. As a result, new walkable and accessible communities, commercial and workplace centres, and various types of housing were created, delivering on important public planning principles.

“The great thing about development is that it enables real change, with real partnerships, that would not otherwise be possible,” Renée says.

West Don Lands offers more examples of the collaboration that she celebrates. “I still get goosebumps when I walk through the West Don Lands, thinking about all of the developer proposal calls, the conversations on how to attract talent and investment into the area, and the decisions we made about the public realm priorities and setting the requirements for the Athletes’ Village for the 2015 Pan/Parapan Games, which is now the Canary District.” Renée adds. “When done well, development involves everyone at the table.”

When asked what has contributed to her continued success in the industry, Renée responds without hesitating: “At every job I’ve had mentors who enthusiastically cheered me on in my career growth and development. I would not be here if it weren’t for those champions who provided me with opportunities I wouldn’t have had otherwise.”

Renée was originally inspired to get into planning by an urban sociology class while pursuing her undergraduate degree at the University of Toronto; it was the first time she was exposed to how cities grow. Her work continues to be influenced by the many great mentors she has surrounded herself with.

“With no pre-existing network, this industry can be very daunting to enter, as opportunities often come from ‘who you know.’ It goes a long way to have people who will take the time to teach you and support you, and help you build your confidence when sometimes you don’t yet recognize your own potential,” she says.

When asked what advice she could provide to her younger self or young professionals entering the field, Renée says to trust in yourself and to invest in relationships. “We are all a community in this great city and we need the work and support of one another to make real change, both in our careers and in the developments we build together,” she says.

“Membership associations like ULI Toronto provide great opportunities to connect with and learn from a network of professionals in the field and participate in important conversations about land use in our city,” says Renée. An associate member with ULI Toronto since 2016, Renée currently sits on the organization’s Management Committee and acts as a co-chair of the Programs Committee. Renée is also a member of the Women’s Leadership Initiative Championship Team.

A last question: if she were not making a real impact in the development world, what would she be doing? “Singing show tunes on Broadway!” she exclaims. Although Renée has a great voice, I’m sure many of us can be grateful for the contributions she has made and continues to make to the City of Toronto’s built environment.

Cyndi Rottenberg-Walker is a Partner with the urban planning and design consultancy Urban Strategies Inc. and is currently Vice-Chair of the