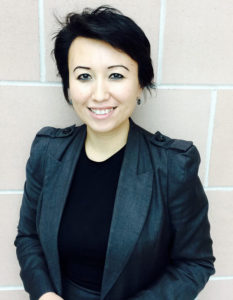 Yvonne Yeung is the Head of Urban Design at the City of Brampton, leading the cross-commission development of Precinct Plans to implement the Brampton 2040 Vision. She is an internationally recognized speaker, author, and passionate contributor to the industry, with her serving as Vice-chair of the Urban Land Institute SDRC Product Council, board member of ULI Toronto District Council and as the ULI Women’s Leadership Initiative Champion.

When Yvonne Yeung was just six years old, she admired the towering shoreline developments in Causeway Bay, Hong Kong, where she grew up. She often reminisces about exploring Hong Kong, recognizing it for its walkability, transit-connectedness and the positive benefits that come with its density. She could feel the city’s vibrancy, the streets full of pedestrians and transit-riders, and their conversations filling up the neighbourhoods. The way people interacted with one another in this urban setting intrigued her, and this is how Yvonne knew, even at such a young age, that she wanted to become a city builder.

While many of her friends who were also immigrants to Canada were choosing more familiar academic areas like accounting or the sciences, Yvonne enrolled in the University of Toronto and completed her Bachelor of Landscape Architecture. There, she was exposed to the fields of urban design and master planning. During her fourth year, she spent half a year in Europe, where she discovered the Scandinavian urban design process. The Scandinavian approach is reflective of how people want to experience a place, with less emphasis on economic uses (as often is the case in North America), as well as their family-oriented and healthy-lifestyle neighbourhoods.

Upon graduating, Yvonne started her career with MBTW Group, and continued her journey with various public and private sector roles, including stints at Urban Strategies, 105 Gibson Centre, and the City of Markham, prior to returning to her alma mater, to complete her Executive MBA at the Rotman School of Management. There, she adopted a holistic view on the city-building process by fully grasping the value a particular piece of land brings, optimizing operations to create synergistic value, and empowering community and political champions through a feedback loop of discovery to fully utilize untapped resources.

Although Yvonne has managed numerous significant projects in her career, her most exciting one yet is the Brampton 2040 Vision. Brampton is one of the fastest growing, most diverse, and youngest cities in the country. In preparing it for the future, the City Council has endorsed large shifts from car-dependence to a transit-oriented city structure and positioned Uptown Brampton as the “new urban transit-oriented gateway” to the city.

This Uptown neighbourhood, envisioned as a 20-minute walkable community, is important to Yvonne as an urban designer in different aspects. For example, it would create safe, complete communities, supporting increased walking, cycling and public transit use, when more than 60% of the Peel residents are considered obese. As well, residents will benefit from reduction in pollution and time spent on commuting. Yvonne emphasized that the need to shift away from such car-dependent communities has become more urgent during the pandemic, considering the inequities faced by many in the Peel Region and similar communities.

“My vision is to leverage COVID to accelerate world-wide movement towards converting 80% of the developed world from car-oriented culture to healthy transit-oriented walkable communities that are equitable, resilient and which invest in families and youth,” said Yvonne.

As she recognizes that the pandemic has highlighted the inequities faced by many, Yvonne takes very seriously the culture of “a City By-Design,” where design excellence is led by City Hall to integrate public interest through co-design with developers and community to address such inequities. She focuses on facilitating a safe collaborative environment for all stakeholders, ensuring that everyone’s voice gets heard. Even within the municipality, which is a vast organization with people often holding very specific roles, she encourages everyone to freely voice their opinions, regardless of their supposedly technical domain. For example, engineers won’t have to feel worried about sharing their thoughts on planning issues. Her task then is to process such a complex set of information with her team and leverage any insights to provide an equitable physical built environment for all the residents.

Despite her long list of career achievements, Yvonne is humble and credits different sources of inspiration for making her who she is today. Along with Jane Jacobs and other key industry figures, Yvonne credits Ken Greenberg, her dear friend and mentor, as a major influence. Ken has shared with her the importance of connecting with people and the power of empathy in placing yourself in others’ shoes. As one of the ways to achieve this, Yvonne has been encouraged by Ken to use everyday language, not jargon, so that as many people can understand and relate to her message, in addition to being an excellent listener and observer.

Since 2017, she has served as the Vice-chair of the Urban Land Institute Suburban Development and Redevelopment Product Council, board member of the ULI Toronto District Council and was named a Women’s Leadership Initiative Champion. She credits ULI for providing her with rich learning resources, and the valuable opportunities to connect with fellow industry members. She also noted that a key virtue of ULI is its ability to shine a light on certain issues, which can otherwise be hard to be raised in certain traditional city-building industries and contexts.

As much as Yvonne loves urban design itself, she’s passionate about seeking great talent and surrounding herself with the right people to realize any given project or vision together. Her advice to recent graduates looking to enter the industry is get as much hands-on experience as possible. Do not be afraid to be selective about the projects you want to engage in, as that will be instrumental in defining a career path and overall industry experience, she says. But when you decide to take on a project, you should commit fully and in-depth. Whether one is in the private or public sector, you should never forget to bring your entrepreneurial spirit to the table.

But it’s not just the young adults that Yvonne helps out — she very much enjoys connecting with kids. She loves to ask them how they could make their city better. She finds that children are often full of curiosity and passion, and are fun to engage with as they provide new perspectives and inspiration. Or, maybe it’s a nice reminder of her younger self, when she was just six years old back in Hong Kong, being amazed by the surrounding developments and the difference that she could make here in this city.