It seems like everyone has an opinion about Toronto’s waterfront, particularly the stretch between Bathurst and Parliament Streets. Only one opinion seems to have reached consensus: there is a significant disconnect between Toronto’s vibrant downtown and its enviable waterfront and significant improvement is needed — the sooner the better. However, this seems to be where the consensus ends. It is also where the fun begins. Earlier this year, ULI Toronto invited members of the general public, architects, designers, planners, artists, engineers, students and members of the development community, both locally and internationally, to tell us how to best “Reconnect Toronto’s Waterfront.” There were two categories of submission: the first was a high-level overview of the waterfront between Bathurst and Parliament; and the second was a repurposing of the ramp off of the Gardiner Expressway to York Street.

The submissions were inventive, challenging and exciting. Recognizing that Toronto’s waterfront is underutilized, the submissions invoked many unique ways in which this “problem” can become an “opportunity” for ULI Toronto Members. Some of the ideas included: closing Lake Shore Blvd. and replacing it with a suspended transit line underneath the Gardiner; creating a new waterway in replacement of Lake Shore Blvd.; an entertainment pyramid over the site of the former York Street ramp; creating water inlets running from Lake Ontario to Front Street; and adaptive reuse was a common theme.

The public was able to review the submissions at the RBC Centre and Simcoe Place during the month of April and at the Eaton Centre following the Awards event. The submissions invoked some strong opinions, including those of ULI’s judging panel, which was chosen based on their unique vested interest in an accessible and exciting waterfront. Judges were Paul Bedford, former Chief Planner of the City of Toronto; Shirley Blumberg, founding partner at KPMB Architects; Meg Davis, VP Development at Waterfront Toronto; and Alan Vihant, Great Gulf’s senior VP, High Rise. The panel preferred those submissions that focused more on the north-south connections at various points along the route rather than improving or over-developing the west-east lines. They admired projects that were shovel-ready or had minimal cost associated with them, but still had a significant impact. They were less impressed with those submissions that rehashed old ideas. There was definitely an aversion to tourism driven concepts such as a Ferris Wheel.

“One thing a city needs is fresh, bold, and interesting new ideas,” exclaimed Bedford. “The waterfront belongs to everyone.” This statement perhaps set the tone for the awards ceremony held at the TIFF Light Box on April 23rd. Moderated by Sean Lawrence, partner at Kohn Partnership Architects and co-chair of ULI Toronto’s Young Leaders Group, the evening’s discussion with the judges revolved around ambitious concepts presented by the entries. Davis gravitated towards ideas that create a lot of land value and development potential. Blumberg noted the challenge of correcting the mistakes in city building that we inherited and the extreme importance of reconnecting the city to the waterfront. Geoff Matthews from Great Gulf, who stood in for Alan Vihant, looked for visionary ideas that would bring a sense of excitement to the waterfront. The general consensus was that the design had to strike a balance between public realm improvement and private sector investment.

Inundation, a submission by Dillon Consulting, took home the prize in the Overall Vision of the Waterfront Category. “The concept was derived from the idea of a series of interconnected extensions of Lake Ontario inland, and the city pushing outwards towards the waterfront,” said Mark Hillmer, a member of the winning team. In addition to providing a strong visual connection between the city and the lake, greater access and closer proximity to the lake allowed development to take advantage of the water for district heating and cooling systems. Open public space networks were made possible converting the rail corridor to parkland and elevated Gardiner Expressway remnants into Podium Parks. The judges were collectively impressed by the innovative idea of extending the reaches of the waterfront further into the city, thus creating kilometers of open public space for the city. The creative reuse of storm water was also noted. “The channels provide an opportunity to create new fish habitat, redirect and filter stormwater before it reaches the lake, and act as detention ponds in the case of severe flooding events,” Hillmer explained. “The visual, functional and sustainable relationships fostered between lake and city in Inundation provide the rationale behind our bold transformation of the Toronto waterfront.”

ReVAMP was a student submission by Carolyn Rowan of the University of Toronto) and Robyn Whitwham of McGill University that won the award in the “Site Specific Idea category. The entry reimagines the Gardiner Expressway at the foot of York Street and Queen’s Quay as a system of connections, “like a synapse between the City and its Waterfront,” said Rowan.  “It’s a draft outlining the potential repurposing of orphaned or decommissioned infrastructure.” ReVAMP was inspired by the vantages of sustainability, efficiency, beauty, and usability. Rowan and Whitwham experimented with maximizing the use of this small, forgotten parcel of land by integrating a mix of cultural, recreational, commercial, and infrastructural programs. The judges were collectively taken by the simple yet imaginative approach towards the adaptive reuse of the Gardiner that brought a variety of activities down to grade. Moreover, it was a concept that could even be implemented in the current fiscal plan.

Over the course of the competition, ULI Toronto also engaged the public through social media by asking them to vote on their favourite submission through Facebook, and Green Deck City, an entry by LINE Architect Inc. won the People’s Choice Award.

While the entries generated some thoughtful discourse, ultimately, it is important to ask ourselves “what kind of waterfront do we want?” said the judges. Unlike Chicago, a city that has committed to the concept of keeping the waterfront public and “forever accessible” for over a century, Bedford criticized Toronto’s inability to commit to a single core principle for even four years. As a result, today’s city builders are faced with correcting these inherited mistakes. Improving connectivity and accessibility between the city and the waterfront is critical and Blumberg voiced her disappointment regarding the current lack of audacious ideas that specifically addressed this issue of connecting people to the waterfront. There are great new neighborhoods such as the Pan Am Village and East Bayfront being created, but connectivity between these fantastic projects is limited. Davis noted that further investment in transit is necessary to make the Waterfront accessible and sustainable. Improving links between North-South and East-West across Toronto’s waterfront would help open the public realm. Drawing on the fact that Toronto is not internationally renowned for its beauty, Matthews stated that the bar is low in Toronto when it comes to the public realm simply because of the current dismal state. Even a few simple planters added in the Roncesvalles neighborhood got people excited, he says. “Toronto needs to understand that the public realm is our common wealth,” Blumberg expressed. “It’s an extraordinarily important thing we all share, but hugely undervalued in City Hall.”

Following the discussion, networking sessions at the awards ceremony allowed guests to ponder over these issues while viewing the presentation boards of all the entries on display. Attendees also had a chance to test-drive Norm Li Architectural Graphic’s new augmented-reality system. Called Liquid, it is a highly-realistic interactive 3D presentation tool developed from an architectural perspective with the ability to change the time of day and explore all aspects of a project inside and out. First Gulf, Flynn, and the Toronto Port Authority were among the other sponsors of the evening, with Building magazine on board as the media sponsor.

With the future in mind, what can we take away from this competition? “Moving forward, it is our hope that this competition will get more citizens interested and invested in their waterfront,” said Hillman. “Building on the great work being done by Waterfront Toronto, we hope that a continuous, strong, and cohesive vision for the waterfront becomes a reality.” There are clearly challenges to be faced, but working with constraints can lead to incredibly creative solutions. “We need to lead the way with reinvention and the creative use of small urban interstices or pre-existing structures,” said Rowan. To create amazing public spaces that communicate “Toronto” to the rest of the world does not necessarily mean starting from a clean slate. Either way, the conversation to find a cohesive medium between transit connectivity, development, and the greater public realm has already begun. 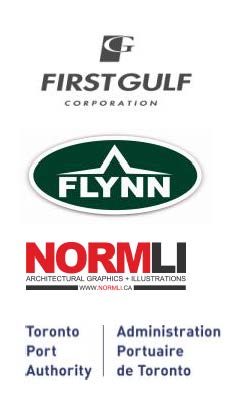 Two Vancouver developments are the subject of new Case Studies from ULI.