The book is a collection of stories told in first person by more than 70 women who have participated in the Judy Project, an executive forum designed to support and prepare women who are in or working towards executive leadership and C-suite positions. The Judy Project was inspired by the late Judy Elder, a Microsoft Canada executive who was a dynamic visionary and respected Canadian business leader who passed away in 2002 at the age of 47. Stories in the book share themes about ambition, courage, and hard choices that each woman made to manage personal and professional lives in the business world.

Mason’s story centred on a period of reinvention she experienced with RBC in 2011, transitioning from her role and life in Ontario to being Regional President of the Atlantic Provinces. “I knew that to survive and thrive, I’d not only have to adapt to my new surroundings and do my job well, but really engage with the community,” she said. Her community engagement and outreach culminated in 2013 when she was named one of Canada’s Top 25 Women of Influence. “Growth happens when we stretch ourselves. You shouldn’t just try to survive dips or setbacks, you should lean into them to truly grow,” she said, quoting author Seth Godin in his book, The Dip.

Bourque started off with a story common among parents: one of her children asking her on the way to school what she made for that day’s potluck when in fact she had not prepared anything. She ended up pulling through for the potluck with crowd-pleasing poutine but she shared the difficulties in building a successful career while balancing life and kids. “I believe I’m a better leader for bringing my whole self to the workplace. So my colleagues are aware of some challenges in my personal life,” she said. Bourque has two children, the eldest is nonverbal with autism and developmental disabilities.  “My sons are my top priority, and I always make time for them. Everyone knows that if I get a call at work about my boys, I answer it. No guilt, no regrets,” she said. Inspired by a quote from Kathleen Taylor, Chair of the Board of Directors for RBC, Bourque believes that  “you can’t have it all but you can have your all.”

“Work-life balance is not 50/50. It’s about making conscious choices, committing to them and feeling no guilt or regret,” she said.

Walczak shared her story of risking financial stability to start her own venture and branching out as an entrepreneur. Starting her career in one of Canada’s top-tier advertising agencies, she was successfully shaping a niche business with her boss at the time, when he left the agency for an opportunity of a lifetime. Only a few years into her career, the executive team felt they needed to hire a more experienced replacement from the outside. She presented a business plan to the President and Senior Vice President that would allow her to keep building the niche part of the business. She asked for six months to implement the plan and if successful, she could lead the division. “If I couldn’t deliver the desired results, I would happily return to the more traditional career path in account management,” she recalled.

She ended up landing the job and it gave Walczak her first taste of leadership. Further on in her career, she felt drawn to exploring the possibility of embarking on her own entrepreneurial venture. “Would I be jeopardizing the financial stability of my family? If this venture were to fail, would my career in this industry be over?” she asked. Walczak’s support network transformed her self-doubt and gave her the confidence to submit her resignation, step out of her comfort zone, and launch The Garden, a creative and brand strategy agency. “Opportunity, ambition and success look very different for every individual. If you limit yourself to a very traditional definition of success where you rigidly stick to what is an established career path, remember that you might just overlook your true calling,” she said.

Allen’s story focused around, what she described as, the “trap of unconscious bias.” She shared a conversation she had with her daughter who had asked a question about God. Wanting to leave enough space in her answer to allow her daughter to form her own beliefs, she kept her answer simple and involving unyielding love for everyone. To her surprise, her daughter asked “I wonder what she looks like?” Allen found herself in a moment where she saw the opportunity that her daughter might have in that “she might not be constrained by gender stereotypes from the biases of generations before.” As she walked through the office, Allen said she saw a generation of “young women and men who might not feel constrained by which parent took parental leave and a generation of young women who don’t have to adopt traditionally masculine traits to be considered leaders.”. She described a recent experience that made her realize her own unconscious biases. After hearing about a pilot needing to make an emergency landing, she said “he must have had to rely on his instruments” only to have her husband correct her, saying that the pilot was a woman. “Yes, we have come a long way, but there’s still work to do and influence to be made to continue challenging our assumptions,” Allen said.

The panel discussion was followed by a Q&A period which included an important question about hobbies and finding time outside of professional and familial responsibilities. Allen plays ice hockey and bass guitar in a band that sometimes performs at charity functions. Mason loves to cook and entertain for family and friends — especially for holidays. Mason says that cooking allows to “channel her [late] mother” who loved to cook. Walczak has recently taken up snowboarding while Moorehead plays tennis and enjoys hiking.

Attendees were seated at tables of 8-10 people and continued with smaller breakout discussions led by a group facilitator after the panel discussion. The questions focused around mentorship, sponsorship, personal hobbies, and balancing professional and personal responsibilities.

Thank you to our sponsors. 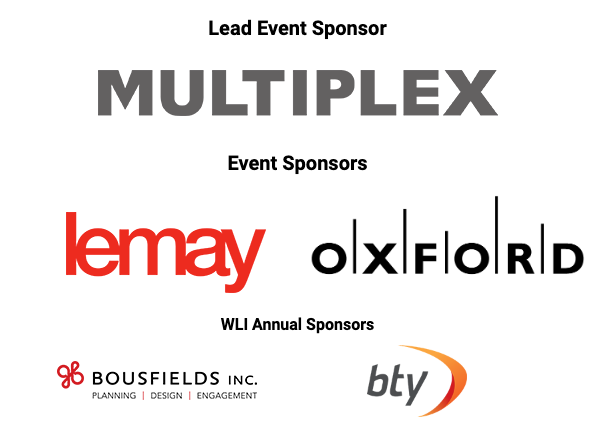